I've been going by Kaydee for a long, long time now. I'm not a solo artist, so my name isn't my brand like it is for, say, Kesha. But I was thinking about it tonight, about how being someone else was a way for me to heal after losing my parents. And I started wondering if it had served its purpose. I'm thinking maybe I'll go back to being Katelyn.

I always want to start out with "HELLO WISCONSIN!" but this definitely is not Wisconsin.

Today was one of those days where I puttered around the house, listening to Spotify's Daily Mix and the whole thing has been awesome ladies of metal with soaring vocals--Epica and Anette Olzon and Exit Eden and

lang_noriegavos and Lacuna Coil and Unleash the Archers and Legenda Aurea and End of the Dream and so on.

Most of them I'm not familiar with and I discovered so many new favorites.

What are your new favorites?

As I was leaving Skid this afternoon, I caught a glimpse of something on one of the chairs in the lobby. I figured it was garbage or some wannabe's info in hopes we'd appreciate their audacity and reach out to them. It was none of these things.
I almost wonder if this unknown artist knows JJ? It's pretty spot on ;) 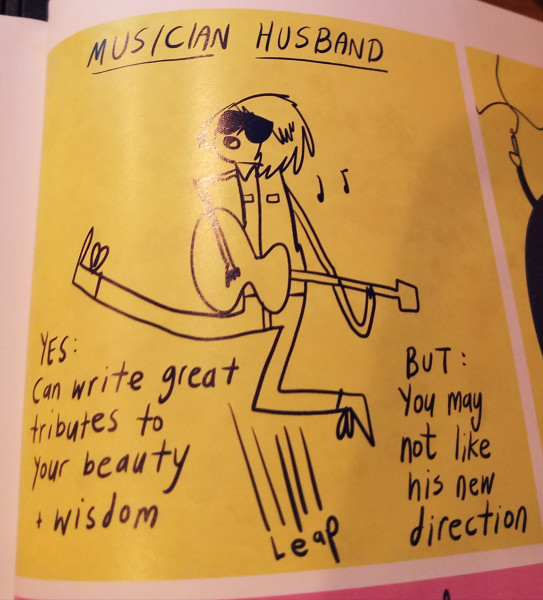 This sucks. So many musicians leaving us before they're supposed to.

I don't post here much anymore. I think it served a purpose in my life and that purpose has been fulfilled. I do lurk, though.

I got into a conversation with

lang_noriegavos this afternoon and she said something that made me want to smack her. But in all fairness, she wasn't the first person to say that to me. There is at least one person on every YouTube video who comments with "I wish I had my life even half as together as you do".

Do you know why it seems like I have my life together? Therapy. Lots and lots of therapy. My rape was NINE years ago this November and I am STILL in therapy. I don't go as often as I used to and I have a different doctor now that we're in California. But I still go. And on occasion, I will wake up in the night in a sweaty panic or someone at a venue will remind me of the asshole who raped me and I'll start hyperventilating.

But you know what the secret is? Just going to therapy isn't a magic fix-all. You can't just say "oh, I'm in therapy so I'm okay now". It doesn't work like that. You have to do the homework. You have to put in the effort outside of your appointment times. There comes a point where you have to force yourself to face the parts of life that hurt.

You can't let pain own you. Because if you do, then all you're doing is breathing life into the monster that caused it.

This is Stack of Puppies' most recent video. I have had so many people tell me how it has become a rally cry for them.

Character name: Harry Kowalczyk
Canon/Fandom: Original: Nonspecific
Canon age: 34
Occupation/School/Etc: Harry has a bachelor's degree in Journalism from Georgetown University. He went on to pursue an MFA in Creative Writing from UMass Amherst. He has written several best selling books, focusing primarily on local events, such as the Perfect Storm and its impact on Gloucester, and the Pemberton Mill disaster in Lawrence.

Married/Single/Etc: Single and married to his research. He spends too many hours traveling or sitting in libraries or talking to locals

Where does the character live: Harry lives in Hadley, MA which is a suburb of Springfield. UMass is nearby. This is where he first heard about the ghosts that occupy Massachusetts State Hospital.

Character/canon wiki links of interest: The History of Psychiatric Hospitals in the 20th century, Photos of Taunton State Hospital that inspired and/or closely match what I see in my head since MSH is fictional.

Character pet peeves: coffee grounds in a cup of coffee

Do you write fiction/fanfiction for this character? Links?
I honestly don't. I haven't given it a proper sit down, but that's mainly because after all these years, I can't figure out the mechanics of how this story would work. I have written a few introduction/scene setting pieces and general ambiance, but I honestly have no idea what the actual plot is. Harry is a new character who came to me last year when I introduced him. He wasn't originally part of the story, but since the story is about a dead girl, she can't very well tell the story. The keyword on his icon is Narrator because I think he's going to take on that kind of a role, telling Agnes' story.

Are you involved in any RPG/etc for this character? I've tried, but Agnes, being dead, isn't suited for the internet.

I just realized it's December 1st. I sailed right through Thanksgiving without realizing it.

Woo apparently I've been sailing since June. Okay then!

I think it's time for a rewatch of À l'intérieur.

The screams are the worst part.

I'm still here. I lurk. I read what everyone is writing. I'm paying attention to you.

AHEM you know who you are.

So, let me just drop this in here with out any more comment.