I'll never forget the first time tear gas singed my lungs. I was up in NY, covering the protests, and watching cops approach with a fear that my white, privileged self has never had to really process. I've reported on protests, but this was different. This is different.

The next time it happened, I was in the crowd that was cleared away so Dear Leader could get his damn photo op.

My lungs are still rattling.

I've had good friends be arrested on camera. Colleagues been injured in the line of reporting. Reporters have been actively targeted, actively hunted. My mom's been reporting from the studio, Peter has been in the streets with me.

We're not going anywhere. Like the protesters, we have a duty. We have an obligation. And if we can do something ... god ... let's get personal here.

If I can do something. If one thing I mention on camera or something I say helps get the word out, then it's been worth it for me. I can put my body in the way ...

I'll be out there again tomorrow.

But tonight, it's curry and a deadline. I could use a drink, but that's for when Mom isn't in the house. She's looking a little shaky right now. Tonight, I'm just reflecting. Don't mind me.

I grew up at your knee. You were as much a part of the family as Corky and Frank and Miles. And I know that Dad's always had a crush on you.

When you got sick, Mom was there next to you you, walking you through what she went through when she was sick. When I had questions, you were an email or a text away. You shaped not just me, not just the journalistic landscape, but the world.

Rest in peace, Cokie. It hasn't been easy this past year, but now you can rest. Thank you for everything - I still have the bear you gave mom when I came home from the hospital. And just so you know - Mom broke the news this morning, and she broke down in tears on the air. So you win.

In case anyone was curious, I've fallen in love with Rose Lavelle. No, she doesn't know who I am and has no reason to give two shits about a dumbass like myself. But, if anyone knows how to make an introduction ... well.

There's a Starbucks where a lot of us journalists do our work. It's become a defacto office - there's about six tables toward the back and we all just gather with our tablets and our notes and our endless cups of Nitro Cold Brew. I tell you, I'm paying way too much for a cold brew but it's so much better than the usual crap they serve. As for the journalists, every one of us are employed full time by an outlet and none of us have a stable place to work. But hey, the state of journalism is just fine in this country. We're just here for the coffee.

A group of us got talking this morning about combining our resources and heading to the border and into Mexico. Yes, outlets have people all over the concentration camps down there. But we want to do more than we're doing. Even though we're all competing for airtime and clicks and all that crap, we got thinking that if we pool it all together and go find a place to stay in Mexico, we can get all of our outlets a stronger story. Catch is, we have to get approval to do that and that means putting our own money into it and that sets a dangerous, dangerous precedent. Network shareholders don't like putting good money into the process. So once we journalists put our own money into it, it becomes a thing. Suddenly, we're all freelancers, you know.

But it's still festering. After all, we can work from a Starbucks in Mexico just as easily as we can one here in DC.

I finally sat down yesterday for a full day with Jake. We went over his history with the different movements here in the states and abroad, what it meant for him to head to Canada when his draft number was up, and yeah, we got into the reasons and politics regarding his relationship with my mother. It's weird to have that come up in a professional setting.

Mom said that she ended up having to do an interview with him a couple of years before I came along and it really threw her for a loop. I sat down and watched it ... man, he proposed to her on the damn air. That took guts.

I think what struck me though, as I was typing up my notes and re-listening to things last night ... is how similar Jake's life is to that of a reporter. Activists live in this world where people hate them, go after them, walk political lines and ... a lot of time, they just screw up.

The older I get, the more I forgive Jake for skipping out on my mom. I always understood, but even with a guy like Peter in my life, I always had those questions. This interview, listening to Jake talking about his life in Cuba and my brother, Ben, another layer of "getting it" really settled in.

So, of course, I called Ben and griped. I think he's still laughing.

But now, I have an interview to finish putting together.

I just didn't think it would happen this fast.

Got a call this morning from my managing editor that she's thought about it and well, I'm still the best person to do the Jake Lowenstein interview they've had scheduled. With full disclosure of course.

I'm wondering if: And in the interest of full disclosure, it should be acknowledged that this man proposed to my mother, got her pregnant, decided the rain forest was more important, took off, only started to care about me when he got his other girlfriend pregnant, bitched and moaned when ... is professional?

Shush. I know it's not. I'll be a good reporter. Truth is, as many issues as I have with him ... he's the real deal. Jake gets in there and rolls up his sleeves and he's sacrificed a hell of a lot in service of a greater good. So, doing this interview is actually a good thing. I just need to have my tantrum first. There's a lot of people around here who can understand full on just how frustrating it is to have a parent who is absent, who chooses a different life over them, who ... just left. And a lot of us around here who have step-parents that are even more amazing than the "real deal" ever could be. In other words, I know I'm not alone. I'm not special.

But yeah, he brings up all of those damn issues that eventually, I'll have my therapist bill him for.

Dad's trying to convince mom that Benny needs a buddy. I think it's working. She just sent me this from the dressing room before his first show ... 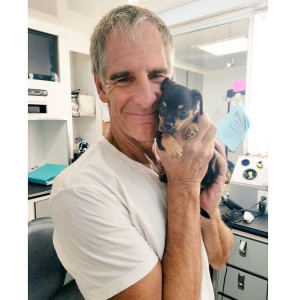 Yeah. I think Benny's got a little bro.

See, now I can never move out. How do I go from having two dogs to none after having a lifetime denied even one dog? Hmmmm?

Between the abortion bans in Georgia and Alabama, and the news about the Equality Act, and everything else I've been focusing on today ...

Maybe I need to just shut it all down and fall asleep in front of Bob's Burgers. Won't change my deadlines, and right now ... it won't change the news. Or how I heard mom as she went up the stairs to bed. "Maybe, in the end ... old Danny boy won the fight."

Happy Birthday to my strong willed, pig-headed, thick skulled, brilliant, dork of a mom who still reads MAD magazine and watches the Road Runner on Saturday mornings. If there is anyone in the world who understands that you can't take yourself too seriously, really, it's you. 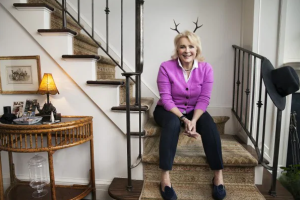 Thanks for everything. See you at dinner tonight.

I spent a lot of today in a Starbucks, taking advantage of the wifi and the coffee. After the disaster on the hill with the AG not showing up for his hearing, I had copy to write. I still have stuff I'm writing.

But, I got up to get a refill and standing right there in front of me was a man I didn't realize I was still in love with.

He's rounded out with the gut of a man in his 40s. We're the same age and his hair is already thinning. There are lines around his eyes and he seemed ...

He's married now. To a lovely woman who, I am sure, is just as unhappy as Sean seems. They have three kids. He even went on a mission. No, I didn't out him. No, I didn't say anything to this woman or the kids. They'd come in for something to snack on while they made their way back to the hotel.

I knew when he got sent away, that this would happen. But I never processed it, you know. Not until he was standing there in front of me. I called Conner and Tia and we knocked out our emotions in video game land for a while. But I'm still sitting here ... I've got a deadline and all I can see in my mind is the dead look in Sean's eyes.

Conversion therapy kills. In so many different ways.