A couple of weeks ago, I got a call from my old coach and GM at Salt City. Like with last summer, they were asking if I'd be willing to work with the guards, the potential recruits, and the people they draft and want to bring on for summer league. This time however, they want me to spend more than a few weeks. Pretty much, after they get done with vacation, they want me putting in serious time.

I've been thinking about taking the step to get back to the game, to take the step to really coaching. So, this is the next step. Definitely don't want to go back full time, not yet, but I'm thinking that with the addition of Rowan to the Gadling/Smith/Munez family group, it will definitely be easier to balance.

After watching the guys get eliminated from the first round and how defeated they look, I'm already in touch with them.

I love this game. I'm ready to be back in it more.

So this article got posted yesterday and I've been sitting with it since then. Kyle Korver is one of the best. He's smart, he's thoughtful, and yesterday, he did something that was incredibly brave considering how racist people can be.

He challenged his fellow white men, especially his fellow players, to start thinking about race in the NBA and in their world at large.

Kyle's honest in this. He talks about his own journey. His own coming to understand where his own biases were. He apologized for his missteps. He took ownership for not listening like he should have over the years.

Kyle and I are the same age. Came into the league around the same time. Played together for a couple of years as he journeyed around. His knees didn't give out as fast as mine did. And honestly, I love that he was the one to write this piece. I just wish and hope that more people will follow his lead ...

When the police break your teammate’s leg, you’d think it would wake you up a little.

When they arrest him on a New York street, throw him in jail for the night, and leave him with a season-ending injury, you’d think it would sink in. You’d think you’d know there was more to the story.

Go read it. It's powerful and passionate and see, our black teammates can talk about this issue until they can't breathe anymore ... but it's up to those of us who aren't black to make changes and lead.

Hey guys, guess what - white sports fans are racist fucks. Just like everywhere else. I'm not playing the notall hashtag game right now. You've got a bunch of white idiots drunk on power and watered down beer watching young black men entertain them. Throw in the bullshit of a white spectator crew in a place like Utah, where you know, the Mormon Church didn't change it's mind on black men in the priesthood until like 1978, and you have a recipe for a fucking disaster.

The kids who come into Utah know the drill. It isn't like they haven't played in these situations before. Utah isn't the only lily white fanbase full of crap. But last night, it boiled over.

I wasn't watching. I was at the park with the kids and then trying to get them wrestled into bed. But I saw and I heard and I for one, am so glad that Salt City responded the way they did. They didn't waste any time, they had their evidence, and they sided with the players and not the dumbass fan being a racist fuck. And I honestly don't think they should have fined Westbrook for defending himself, but there are rules and regs we have to follow for interacting with the fans. But I tell you, I hope the players on Salt City step up to pay his fine.

Wondering what I'm rambling about? Here you go.

There's been a lot of conversation around here lately about the problem of sports and cost and injury. And so, I want to say a couple of things in relation to this link I am posting.

2. Most of the kids in this video, they aren't going on to play professionally. Some are going to be coaches or trainers. Most will just look back with fondness regarding the time when they put their bodies through hell for the love of a game.

3. Every single one of these kids should be paid for the work they do. That isn't the point I'm making here.

This video, this is why we play. Some kid's phone rings while coach is speaking. Which is ALWAYS against the rules. And when he answers it, everything changes. The moment the team hears the news, they are around him, cheering, holding him up.

See, sports reminds us all that damn hard work pays off. Some of it is luck, some of it is timing, and almost all of it is showing up and doing the work. You aren't getting past pee-wee leagues if you don't put in the work.

Congrats, kid. You deserve this.

His mom called in the middle of team huddle... to tell him he’s officially on scholarship.

Jonah is his mother's son. He adores her, adores the music. The other day, I swore I saw him giving critique about some bass line in a song. If he can be her shadow, he wants to be there. We're starting to think that Izzy might be mine. If Jonah wants to be with the music, Izzy is more than happy to push balls around all day long. 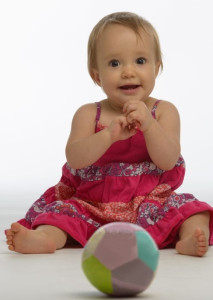 But I tell you ... Jonah might be AJ's shadow, but he looks just like me. This little one? She's totally her mother.

Look, the All Star game in the NBA is a damn joke. At least in baseball, the winning league gets home field advantage in the World Series. In the NFL, the pro bowl is ... less than a joke. But, being named an All Star is huge for a few reasons:

1. It impacts your contract. Players get bonuses for being named to the game.
2. It impacts your visibility. Visibility is what gets endorsements.
3. It impacts trade ability and contract negotiation in free agency. If you're an All Star, teams take a more favorable look at you.

The All Star game is a joke. I know. I went three times and turned it down a couple of times. It's a mastubatory love fest for league sponsors who want to get up close and personal to people who line their pockets.

So why am I rambling nonsensically about a joke? Because a dude I played with starting in his rookie year was snubbed and snubbed hard. He's the number one defensive player in the league and he wasn't even named to the reserves team, which is voted on by the coaches. The league preaches defense all damn day and then ignores the defensive players in the small markets. What's worse, is he was at his press conference today after practice (it's an annoying requirement) and he was talking about how his mother called him crying about it, how he got emotional about it, and he got worked up and walked away and now sports social media is dragging him for showing emotion.

Look, the All Star game is a joke. But until the league stops pretending like it matters, it's an important joke.

I love it when Salt City is in town. I get to spend time with Coach and the team. Yesterday, I hung with the guys at shoot around, helped the young kids with some fundamentals, and got my ass kicked in wind sprints by the guys who split their time between the development league and The Show. Old man is Old, I got reminded. (Old man also needs new knees.) But hanging with Coach was so affirming. I miss being in the gym every day, and while I'm not looking to go back to work any time soon (see: old man needs new knees) I do really like helping them all get better at the game. So yeah. Maybe someday I'll look into coaching.

Anyway, the game was fantastic. Salt City is holding it together and I'm so proud of the kids who are bursting out of nowhere the last couple of years. Best thing to ever happen to Donovan and Ricky was my retirement, honestly. And watching Rudy go from the too long for his frame child to the man he's become ... I got to play with this beast and I am so honored.

This shot was captured during the game and I'm still in shock at just how high he got. Look at that length. I wasn't going to ramble about how much I love this game tonight, but then I was scrolling instagram and saw this picture and well, can't do anything but share this moment of beauty. 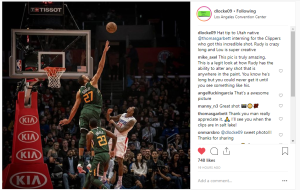 See, just cause you're out of the league doesn't mean you stop chatting with friends who still play, coaches, trainers. And Salt City is currently down six players due to injury, including every single one of their point guards. Every one.

Haven't run a wind sprint in a year anyway. I'd probably die.

But it was fun to taunt AJ with this morning. ;)

Gotta give Salt City some serious credit for this. Wow. It's awesome. This is the power of sportsball. Right here.

South African artist Karabo Poppy melds the power and creativity of basketball with her own roots in new downtown mural.


The whole article is here. And let me tell you, I just ... fucking love this, man. When my kids start asking why dad did something like play basketball ... I'm just gonna show them this.

I used to play soccer. In high school I made the basketball choice, but I was still offered a soccer scholarship. I love the game. It's utterly pure, really. You kick a ball. That's all you do.

Anyway, today I was playing with Izzy and rolling balls at her and she seemed to gravitate much more to the soccer ball than the basketball. And while my heart can't help but hope that at least one of my children will follow me into the exciting world of hoops and squeaking sneakers in the gym, the joy of one of them possibly choosing soccer also makes me tear up.

Yes, yes. I'm choosing my daughter's sports choices before she can even walk.